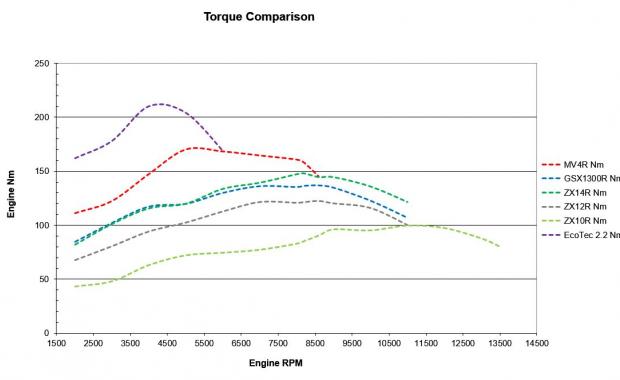 Simplifying things a lot you can think about Power as the ability of the engine to push your buggy along at a constant road speed and engine RPM.  You can think about Torque as the ability of the engine to accelerate your buggy at the same RPM point.  Power is needed to push a buggy up a hill or through sand or along the road.  The amount of power required will vary depending on a whole range of things.  Changing the speed of your buggy is called acceleration (we’re only going to talk about positive acceleration here, e.g. getting faster) and it takes torque (force x lever arm).  Torque and power are related; as we found out last time it takes torque to produce power, the thing we also discovered is that the same amount of power can be achieved in a number of ways – low RPM high torque, or high RPM low torque or somewhere in between.  What does it mean?

Here’s an example with made up numbers:

It takes a certain amount of power to move my truck along the road towing my buggy at 100kph.  This combo weighs 5500kg.  I get the power from a Cummins 6bt diesel that produces 600Nm of torque but only revs at 1600rpm at that speed and load.  That equates to 100Kw.  So I check out the dyno charts of a few engines and notice the ZX10R engine can prodcue 100Kw at 10,000rpm.  In theory the ZX10R engine could push the rig along at the same speed with the right gearing.  Looking at the dyno charts again we can see that the ZX10R produces 95Nm at that engine speed.  Both set ups are geared to suit the engine’s torque delivery and the desired power output at the drive wheels, I’m just simplifying by talking about engine torque.  Gearing just multiplies available engine torque (next article!) it can’t generate any extra.  We’re also going to assume a lever of 1m in the torque equation so the m in Nm becomes a 1 and drops off.  As it’s the same in both cases it makes the comparison easier but isn’t reality for either individually.

So ignoring the actual numbers, you can see that although the two engines can produce the same power, the torque levels at the required RPM, and the resultant acceleration, are wildly different.  Buggies are constantly accelerating (forwards, backwards or sideways), more torque at any given time = more forward acceleration, and the fatter and flatter your torque curve, the less you need to be worried about what gear you’re in to maximise the force to the tyres.  Sufficient torque at the right revs gives you the power you need to keep your speed maintained in the situations you drive in (gearing comes into it here).

Also remember that the torque and power curves are more accurately represented by area graphs as the engine operates in the area under the line.  The line itself represents maximum effort or output at any point in the rev range.  On many occassions the engine will be operating at some point below the line.  Clearly you wouldn’t want to cruise the highway with your foot to the boards at 10,000rpm!

That was two extreme cases and a bit simplified, but it shows you why torque is important and not just power and why you should look at the torque curves for your engine choices.

I’ve done up a rough chart comparing power and torque figures from these varied engine choices:

The dyno information I have estimated from available charts representing engine output.  The absolute numbers are probably not exact but its the overall concept that counts.  I’ve gone metric here, the USA guys will have to convert for absolute numbers but its the relationships that we want to consider anyway.

This doesn’t tell the whole story as the gearboxes are geared differently to make the most of the engines torque range.  We’ll discuss the importance of gearing in our next article.