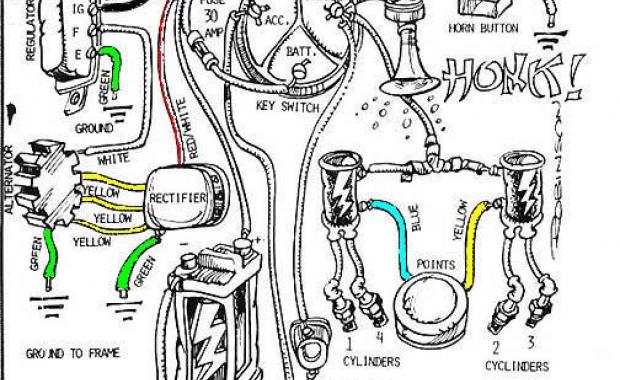 Not a definitive guide to electrics, just a few basic pointers.

Always disconnect the (-) negative battery cable before working on the buggy’s electrics.

Use only a sealed battery; for safety’s sake you shouldn’t use a refillable battery.

Keep it simple. Where possible, extend wires with the same colour/trace as the original, or replace the entire length with a new, suitably sized wire of a different colour.

Install a battery master switch (BMS), observing any race sanctioning rules as to its placement.

Mount a “pull on/push off” kill switch on the steering wheel or on the dash, close to your hand, which when hit in an emergency, will cut the ignition circuit and fuel pump.

If fitted to your motor’s gearbox, do use the neutral indicator switch, and connect it to a blue light in the dash (you’ll thank me for that one).  Don’t forget to earth the side stand switch, and any other “safety” switches that may prevent the motor from starting.

At the rear, mount a high-level red brake light, and an orange dust light. The dust light must be wired through the ignition switch so that it is on when the motor is running.

Use the best connectors you can afford, and solder them to the wires and cables. Those so-called “insulated” crimp connectors are notorious for causing hard-to-find electrical faults.

Only use sealed switches.

Once all the wires are hooked up, seal the connections with brush-on Liquid Tape.

Ensure all wiring is bundled tightly and secured to the chassis with cable ties or Velcro straps every 100mm.

Some racers prefer to remove the alternator to save weight and the drainit has on the engine’s power. The alternator on some bike motors is easily removed by un-doing a few screws and fitting a simple blanking plate over the alternator aperture. If running without an alternator, fit a plain BMS on the battery’s earth cable.

Removing the alternator though, has one very obvious penalty; a suitable battery must be fitted to cope with, and last the duration of, any event the buggy will run in. A battery in good condition should be capable of providing enough power for about half an hour’s racing, without any charge being applied to it.
Having two batteries can be one way around the problem at sprint races at least. One battery is carried in the buggy, while the second is hooked up to your tow-car’s charging system while you’re racing. The batteries can then be swapped over between sprints.
Endurance races pose a problem though, as they run in excess of half an hour.

There is another solution. The alternator can be left in situ, but the drain on the engine’s power can be eliminated as and when required.
There is a proprietary box of tricks on sale, which does just this, but a little ingenuity and backyard electrickery will produce an effective and cheap alternative.

Fantastic! Quick, go and buy a toggle switch and mount it on the dash.
Not so fast there! There’s a little bit more to it than that.

When (not if) you have a racing accident, and a Marshal removes the key from your BMS, the alternator could be damaged if the BMS is turned off while the engine’s running. A basic BMS has just two large terminals, which are hooked up to the battery’s earth cable, and merely cuts the power from the battery, but it doesn’t address the residual current from the alternator.

What you need is a BMS with four additional (usually standard blade type) terminals.

One pair of blade terminals opens and closes along with the main switch, which connects the alternator’s exciter circuit. A separate dash-mountedswitch can then be used to break the connection to the alternator when the engine’s running.

In the event you are on your roof with the engine still running, the key can be pulled from the BMS, whereupon the Alternator Field Disconnect leapsinto action. The AFD switch closes before the main and exciter switches (and opens before they do too). The AFD allows residual current from the alternator to be dumped to earth through a 3 Ohm, 11 Watt ceramic resistor.  Thus damage to the alternator’s diodes is prevented, and the whole ignition and electrical system is rendered inert.

Most BMS plastic keys are red for easy visibility, and often have a small hole in them. I usually thread a bit of 300 lb nylon fishing line through it, using an aluminium fishing line crimp to secure the loop. I then crimp an electrical 6mm ring crimp to the other end, and put it over one of the BMS mounting screws, so the key can never get lost.

Another use of the hole is to connect a throttle type cable to it, and run the cable inside the “office” to an old-fashioned pull type choke knob . In the event of a big “off”, not only can you hit the normal kill-switch, but you can also pull on the cable, disconnecting the BMS. Just don’t get the two knobs confused!