There are only thirteen or so small bolts holding the whole body onto the floorpan and there are hundreds of manufacturers of aftermarket panels and other goodies for the humble Beetle too. So, I ask you, why wouldn’t you do this to a Beetle?

This chassis and suspension aredesigned as a performance replacement for the pressed steel VW Type 1 floorpan and torsion bar suspension. The purpose isto uprate the suspension, brakes and driveline to match the increase in output of the transplanted V8 engine. Although the chassis is many times stronger than the original, it is still designed to work in unison with the incredible strength of the Beetle body as a whole.

If this chassis were to be used as a replacement for the VW floorpan with just a fibreglass beach buggy or kit car, it would require additional bracing (especially along the sides) as the inherent strength and support of the egg-shaped steel body would be lost. In any case, consider the single roll bar as a minimum requirement. The rigidity and performance of the car would be further enhanced if a full roll cage were constructed over the chassis.

With enquiries about this chassis from just about every tangent of the globe, there was a problem: Which steering rack, front uprights and rear hubs should the design be based on so it would be universally applicable? it was virtually impossible to choose just one donor vehicle as no one car is available worldwide.

So, there are several variants of the chassis. The choices for the rack and uprights so far are the Mk III/IV/V Ford Cortina/Taunus and the Holden Torana.

Originally the rear hubs were built on BMW bearings and CVs etc, but we no longer have all the bearing data for them so only the model of BMW is specified and the builder will have to source the parts and then fabricate the actual bearing housing for the rear upright to suit the bearings and stub axles.

Another readily available donor for rear hubs, bearings, axles and CVs etc. would be a VW Camper Van, though there are many more solutions. The plans will reflect the position of the bearings and hubs, it’s only a case of making up a suitable bearing carrier and welding it in place in the upright. The donor parts (especially the CVs) need to be rated for the same horsepower and torque as the engine in the new chassis.

Engine and transaxle choice is much wider and there are just too many options to list here. A brief choice of transaxles would be such items as the VW Type 2, ZF, Renault 369/UN1, Audi 100/200/9000 and Audi 01E 5 and 6 Speed Quattro, Hewland and any of the custom sand car transaxles.

Beetles….love ’em or hate ’em, they are a hot-rodder’s dream. Within about half an hour, the body can be removed, and slid onto a decent chassis and drive train!

Product Type: Build Manual (A PDF document that includes CAD drawings (or ‘plans’) and text that explains how to build something.) 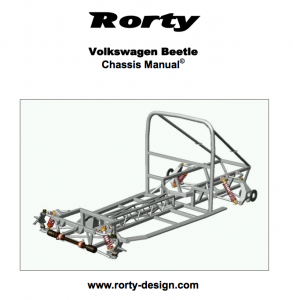 One thing the manual and drawings are not short of is detail!

The manual and plans have been carefully produced to enable competent DIYers to construct a full chassis and suspension package for themselves by following highly detailed and easy to read drawings in conjunction with the required donor parts.

The comprehensive manual consists of the following: 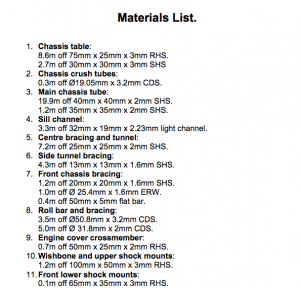 print to any size you choose.  Check the default sizes before printing.